Wolfgang Digital is an award-winning integrated performance agency based in Dublin, who provide world-class digital marketing results to their customers.

Aside from their accolades and reputation as experts in Digital Marketing, the Wolfgang team also pride themselves on their culture and passion for social responsibility. They are currently working towards becoming Carbon negative and have launched their own Not-for-profit; Wolfgang Forestry with the aim of reforesting Ireland’s native woodlands: last year, they planted over 1000 trees!

Read on to find out how Tommy Gough, Accounts Assistant at Wolfgang Digital implemented Chaser to help the business save time automatically chasing invoice payments, whilst maintaining the personal touch with their clients!

Before Tommy joined Wolfgang Digital, manually chasing invoice payments from clients became too time consuming for the team. So, they opted to use Xero’s built-in invoice reminders to chase their customers for payments.

Unfortunately, they found their clients could easily identify these as automated and they risked damaging their valued customer relationships. As a business that’s built very strong client relationships, it was key that any automation software would not damage these valuable relationships and helped to maintain them.

Wolfgang Digital needed to be able to personalise their invoice reminders in a way that didn’t appear automated and that would let them maintain that personal touch with clients.

When applying for his Accounts Assistant role at Wolfgang Digital, Tommy was asked to present a piece of software that would offer the company great value for money and help save them time.

Tommy had already seen the benefits Chaser had on time saving and cash flow in his previous role, as well as the huge levels of personalisation and customisation that can be achieved. So, he thought pitching the Chaser software would be a great way to show initiative and help solve problems within their credit control.

He was right, his presentation was well received and Tommy was offered the job!

Getting started with Chaser

The first task in his new role was to convince the rest of the team that Chaser was the way to go. This proved a simple task as he was able to take out the free trial and show the benefits of Chaser straight away, without spending a penny.

After just an hour of editing their account and making sure every chaser looked perfect, they were set up and ready to automate their invoice chasing!

The impact that Chaser had was clear, being able to send truly personalised invoice reminder emails on different schedules meant that they could maintain their personal relationships with their customers while helping them save time and getting their invoices paid faster.

But Wolfgang Digital aren’t the only ones who have seen such benefits from Chaser’s automated invoice chasing! In fact, on average, Chaser users:

Tommy loves that Chaser allows him to personalise invoice reminders to customers by using multiple email templates, multiple schedules and allowing him to include his email signature in the emails sent through Chaser.

However, it’s the ‘Thanks for paying’ emails that Chaser automatically sends on his behalf after receiving invoice payments that really stand out to him.

Would you like to save time on your credit control whilst maintaining great customer relationships? Join thousands of businesses like Wolfgang Digital using Chaser to transform their credit control - our average user gets paid 16 days sooner.

It takes just 2 minutes to integrate Chaser with your accounting system and you can start chasing overdue invoices instantly. See how easy it is to save time and boost your cash flow with Chaser for free, for 14 days:

8 templates to get invoices paid during a recession 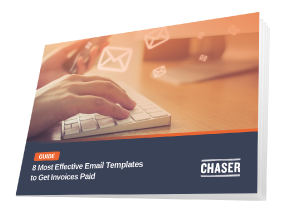